>>>TO THE GERMAN VERSION

Helene Fischer putting down vocals for her album using a Pauly pop filter.

Paul McCartney uses a Pauly pop filter in Capitol Studios recording the tracks for “Kisses at the bottom”.

Don’t bother asking accomplished recording engineer, mix engineer, and producer Rafa Sardina if he thinks it might be bad luck to have 13 Grammy® and Latin Grammy® Awards because a) it obviously isn’t and b) he’s too busy traveling the world in support of projects past, present, and future to respond.

On top of an incredibly diverse client list that includes Elvis Costello and the Roots, Stevie Wonder, Placido Domingo, Miguel, Lady Gaga, Tim McGraw, Harry Connick Jr., and Michael Bublé, Sardina is busy as Governor of Grammy’s Los Angeles Chapter – among other things. But if you want to talk gear or techniques, he’s always game.

Such was the case with pop filters, devices that most engineers believe to be too subtle to be worth discussing. Not so with Sardina: “People know that pop filters are subtle things, but they think that means they are unimportant. Some people may not have the training to hear what they’re missing with a bad pop filter, perhaps because there are potentially other losses in the signal chain that are as big or bigger than those attributable to the pop filter. So they don’t think the pop filter matters. But I disagree with that view strongly. Different pop filters have very different characteristics and those ‘subtle’ differences add up to the difference between a lively, energetic recording and a flat, boring one.” (Mind you, this is coming from a 13x Grammy winner!)

By his own estimation, Sardina owns every single pop filter on the market, and he’s done every imaginable shoot-out between them, and even between combinations of them. “First, I do comparisons with and without the filter,” he said. “You have to listen to the parts of the recording without the pops to hear the difference. Of all the pop filters I have ever used, the Pauly P120 pop filter is undoubtedly the best. I don’t know what magic Pauly used, perhaps it’s the way the air moves between the two membranes, but it’s as close to utterly transparent as I’ve heard. The Pauly preserves the high-end information, the air that gives a performance life and existence between the words.” On top of owning all of the pop filters on the market, Sardina owns three Pauly’s.

Recently, Sardina used his Pauly pop filters to record vocals for Placido Domingo, Alejandro Sanz, Calle 13, Harry Connick Jr., Jordan Smith, and Ganister Vocal Works. “But pop filters have many other uses; they’re not just for vocals,” Sardina adds. “Like when I put a condenser on a kick drum: the push of air can cause things to crap out. The same sort of thing happens with a lot of brass instruments.” In that spirit, Sardina recently used his Pauly pop filters to record drums, brass, and more vocals for D’Angelo & The Vanguard, Elvis Costello And The Roots, Humane Smith, Laura Michelle, Il Volo, Stope, and Cristian Castro.

Hugh Laurie (“Dr. House“) putting down a pretty cool version of „Unchain my heart” in the Ocean Way Studios, L. A. And he’s singing into a Pauly pop filter – made in Germany.
(This YouTube video had 15 millon clicks by mid-2022).

US superstar Jason Mraz (“Long drive”, “I won’t give up”) using a Pauly pop filter in the studio.

“Hello, I got a Pauly yesterday and right away tried it on a voice I know. I’m kind of speechless. It sounded so tender, funny, rich in detail. Besides it looks super. Even on this YouTube video you can hear the difference.”
Ralf

Successful party hit-producer and singer „Ikke Hüftgold“ (Matthias Distel) in his sound studio in Limburg, Germany, while singing and bellowing. His Pauly pop filter reliably protects his large membrane microphone from rampant plosives.
Ikke Hüftgold‘s Label Summerfield Records published 2022 the German summer hit “Layla” with singers Robin & Schürze. Disputed because of its lyrics, the controversial „Ballermann-Song“ was streamed an entire 60 million times by end of July 2022, according to GfK Entertainment, and stayed at the top of the charts for about 8 weeks. (Complete YouTube-clicks of the different versions: about 25 million, as of July 2022).
Photo: © Thomas Frey/dpa

A short YouTube video with Christian Brückner, his Pauly pop filter and an impressive documentary film about the animal kingdom:

British musician Daniel Hope is one of the most exciting musical personalities. Here’s the virtuoso violinist, author and presenter (with his Pauly pop filter) in 2021, presenting the classical music that influences and touches him on WDR 3 television. He also presents classical music on NDR, arte and other stations, very charmingly. 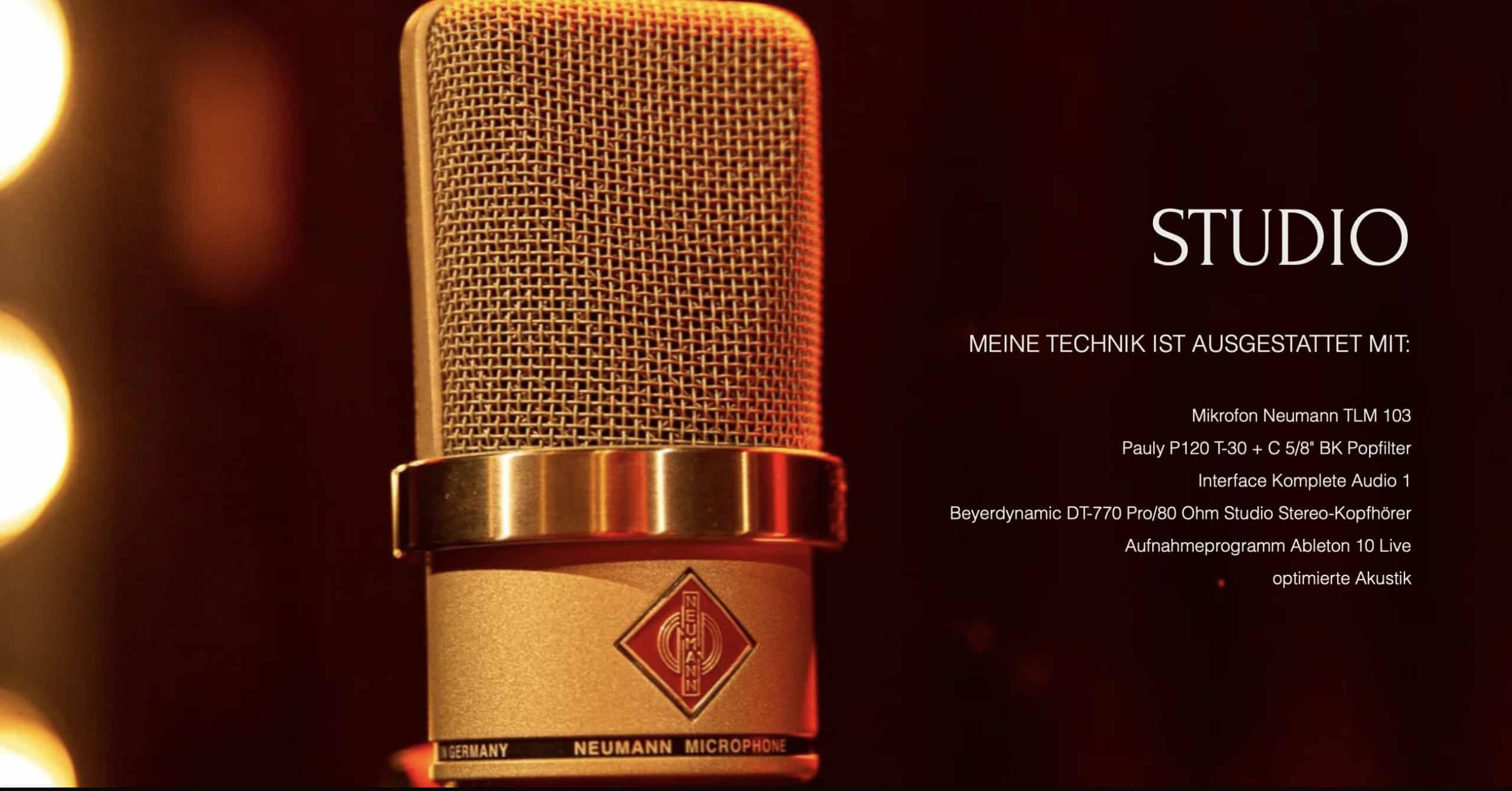 In their online presence, professional speakers usually show a list of the recording technology used in their studios. A Pauly pop filter is then at the top of the list directly after the Microphone. One knows: For customers this is a reference besides microphone, acoustics and recording technology, which promises a good recording quality.
(With warm response we have included these two pages by Vanessa Frankenbach and Pat Murphy as an example) 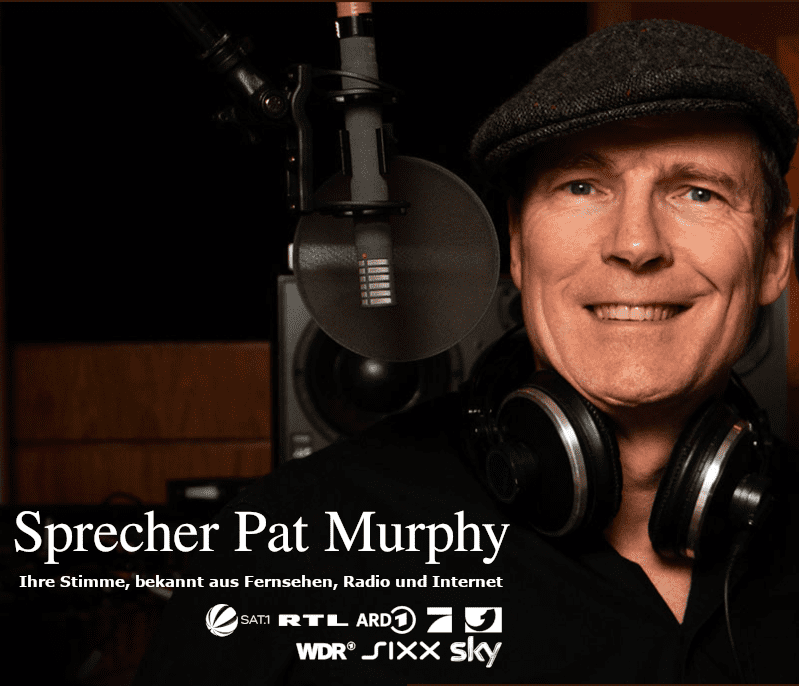